On Anna Maria Island, when you see an empty lot with new construction about to begin, you know the new building will tower over the traditional Old Florida one-story homes in the neighborhood. Why? It’s the law, to some degree, at least. In 1975 FEMA made it mandatory that all new construction place the first living level at a certain specified number of feet above sea level, which means either having to raise the lot with a huge amount of fill, or building the living space on a second and, possibly, third floor. This coincided with the start of government involvement in flood insurance programs. When the government starts ‘taking care’ of you, it starts telling you how to do things.

END_OF_DOCUMENT_TOKEN_TO_BE_REPLACED 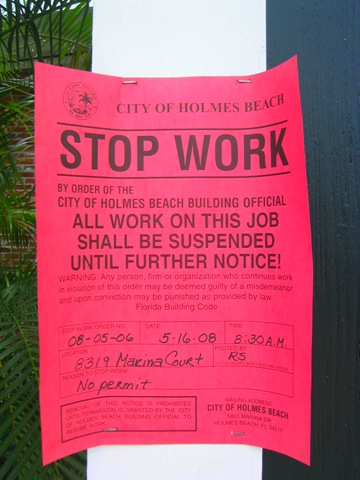 Looks like a builder got caught up in the new Holmes Beach City permit approval process.

This house was red flagged 2 weeks ago after demolition work had begun. The notice states the reason to be ‘no permit’.

Two months ago the City of Holmes Beach reviewed its building code after discussion with FEMA rules on floodplain insurance.

Subsequently, a draft code was approved and went into effect, with a projection that new permits received by April 9th would be issued in 30 days.

However, demolition began on this property early April, with walls removed, roof peeled back, and interior gutted.

END_OF_DOCUMENT_TOKEN_TO_BE_REPLACED

This website uses cookies to improve your experience while you navigate through the website. Out of these, the cookies that are categorized as necessary are stored on your browser as they are essential for the working of basic functionalities of the website. We also use third-party cookies that help us analyze and understand how you use this website. These cookies will be stored in your browser only with your consent. You also have the option to opt-out of these cookies. But opting out of some of these cookies may affect your browsing experience.
Necessary Always Enabled

Any cookies that may not be particularly necessary for the website to function and is used specifically to collect user personal data via analytics, ads, other embedded contents are termed as non-necessary cookies. It is mandatory to procure user consent prior to running these cookies on your website.